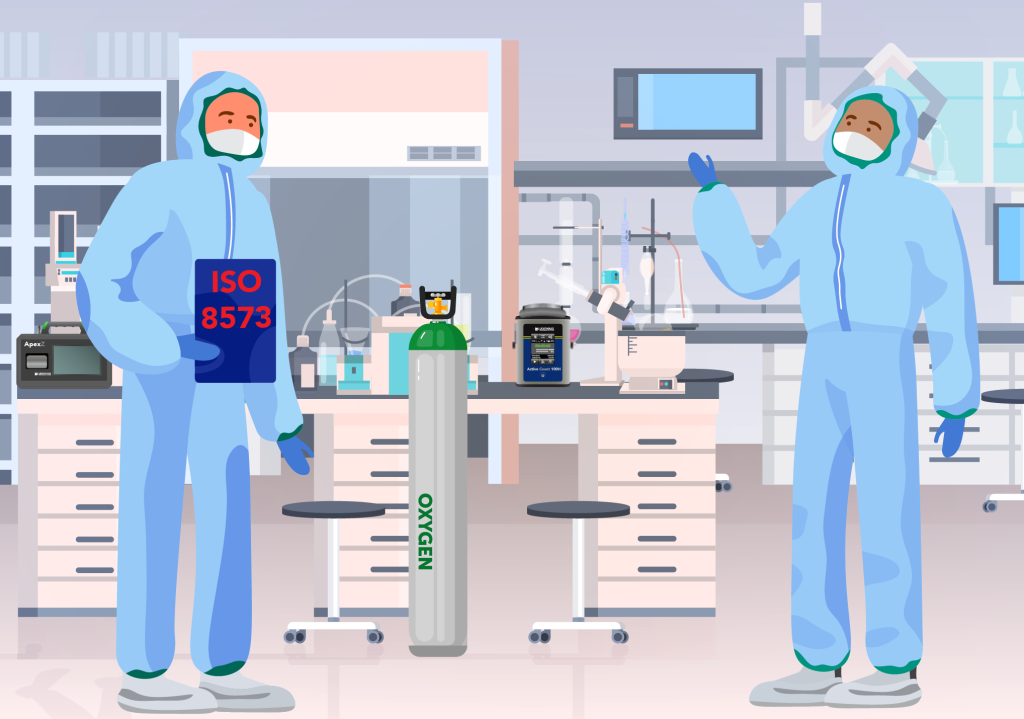 If you use compressed gasses in your cleanroom, ISO 8573 is an important set of guidelines and regulations for your cleanroom, specifically ISO 8573-1:2010. This set of guidelines is maintained and governed by the International Organization for Standardization (ISO), an international, non-governmental organization dedicated to creating worldwide standards for a variety of industries. ISO standards and classifications for cleanroom are widely considered standard and best practices.

In ISO 8573, they have put together a comprehensive set of standards outlining how to test “purity classes of compressed air with respect to particles, water and oil independent of the location in the compressed air system at which the air is specified or measured”. While we talk a lot about clean air and clean liquid in cleanrooms, we cannot forget other resources, such as compressed gasses. Compressed gasses present an additional contamination risk, especially in cleanrooms with a classification of ISO 5 or cleaner. This risk of contamination is why monitoring compressed gasses matters: it protects your end user and product from risk.

ISO 8573 is broken into 9 parts that cover a variety of topics, from measuring the contamination permitted in each classification of cleanroom to testing methods. There were parts updated in recent years, while other parts have not been updated in quite some time. Even if they have not been recently updated, they are still regularly evaluated and will be updated when necessary.

This portion of the document is the primary point of reference as it describes the contamination permitted in each cubic meter of air per the ISO classification of the room. When describing the ISO 8573 class of cleanroom, you will list three numbers representing the particle, water, and oil measurements.

This document outlines two methods: Method A and Method B. Method A involves collection using inline coalescing filters. On the other hand, Method B uses sampling discs in a holder that uses a solvent to extract the oil. It is then analyzed by infrared spectrometry or gas chromatography.

This document outlines how to measure humidity found in compressed air, as well as the limitations of the methods.

ISO 8573-4 is a critical portion of this document, as it outlines testing methods for solid particle measurement in compressed gasses, while also giving guidance on how to select equipment for the job. Using the methodologies outlined here, you can classify your cleanroom in accordance with ISO 8573-1.

This document goes over the testing method to determine oil vapor content in compressed air. It goes into further detail on how to test the level of organic solvents in the vapor, which can be difficult to separate from other hydrocarbons.

This portion of ISO 8573 outlines testing methods to measure the contamination of gasses in compressed air. You will find sampling techniques, measurement and evaluation, uncertainty considerations, and reporting.

ISO 8573-3 outlines viable organisms, such as yeast, bacteria, and endotoxins. This document shows how to distinguish them from non-viable particles that could be found in compressed air.

Building on the rest of this document, this portion dictates testing methods for solid particle mass concentration found in compressed air, which is listed as the mass of particles within the maximum particle size limits. This also specifies the methods’ limitations.

Lastly, ISO 8573-9 outlines the test methods for figuring out the liquid water content found in compressed air, which is dictated as the water mass concentration.

ISO 8573 covers any cleanroom using compressed gasses and is abiding by ISO standards and classifications, as described in ISO 14644. These guidelines cover a variety of industries, from pharmaceutical manufacturing to food processing to semiconductor manufacturing and everywhere in between.

While ISO 8573’s most recent update was in 2018, many regulations and guidelines are changing, such as ISO 14644 which changed in 2021. Other regulatory bodies, such as GAMP and the FDA, are also making adjustments and changes. When a set of guidelines hasn’t seen an update in many years, it is only a matter of time before that one changes, too. That is why it is important to stay up to date on your industry and its corresponding regulations.

The good news is that it is simple to do with our free and expansive Knowledge Center. We’ve put our resources and knowledge to work and compiled a vast compilation of easy to understand white papers, blog posts, videos, and more breaking down industry standards, new trends, regulation updates, equipment, and more.

And it is all for free!