The History Of Particle Counting Technology

PrevPreviousGMP Annex 1 2022 Update Breakdown: Part 2
Next8 Features To Look For In An Active Air SamplerNext 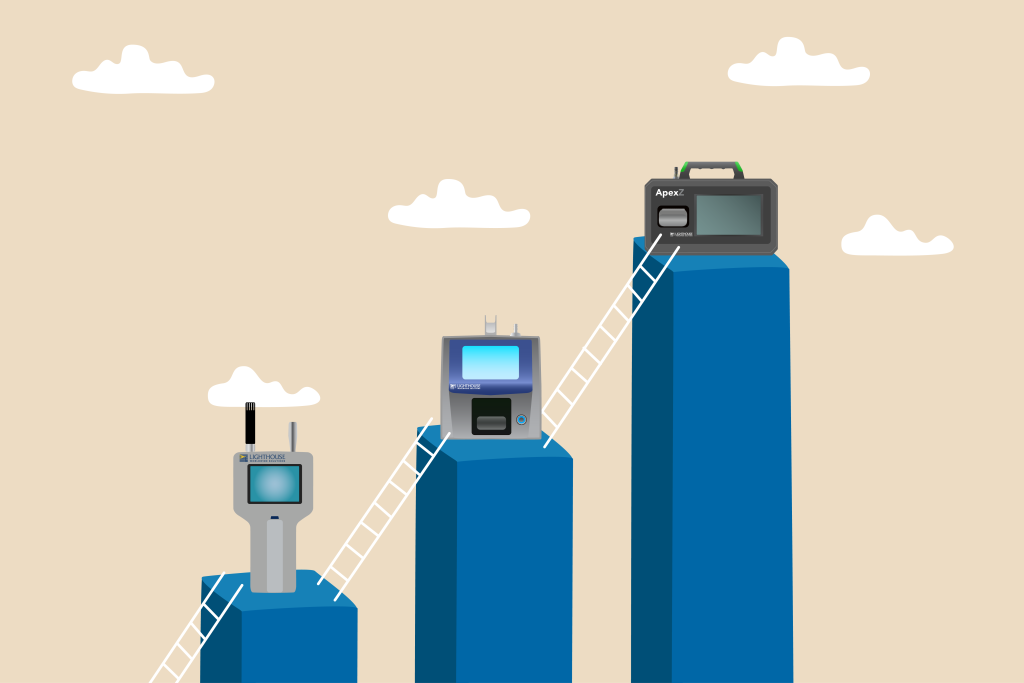 This year, Lighthouse Worldwide Solutions is celebrating its 40th anniversary. Over the last 40 years, we have seen massive changes in particle counters and cleanroom monitoring technology intertwined with advances in technology outside the cleanroom. Today, we’re looking back at where it all started and the influences on the industry that have progressed it to where we all are today.

1947 was a big year for particle counters, because that is the year Frank Thompson Gucker invented the first light scattering machine. While John Tyndall had first discovered the principles of light scattering in 1859, it was F.T. Gucker who captured the natural phenomena into a machine that allows us to quantify particles in the air.

Also in 1947, the International Organization for Standardization (ISO) was officially established by 67 technical committees. Of course we know now ISO would go on to be an important governing and regulatory body for cleanrooms and particle counters.

F.T. Gucker continued his innovations by changing the angle at which the particles were detected to allow for a more sensitive reading.

Outside of the basic invention of a light scattering based particle counter, the 1960s might be the biggest decade for particle counters. First and foremost, Willis Whitfield invented the modern cleanroom in 1962 to aid in the production and handling of nuclear weapons. This presented a real, tangible need for particle counters, as there were now heavily filtered rooms who’s entire purpose was the prevention of particles.

Also in the 1960s, the semiconductor industry exploded. As innovation in this industry advanced, it quickly became apparent that the smaller and smaller semiconductors would need to be manufactured in safe environments, as they were subject to damage from particles.

They were originally very crude machines. They used discrete logic chips without controllers or onboard processors. They had to be manually calibrated. They worked using binary counters which would periodically transfer the counts to a numeric display, then reset and restart. In comparison to today’s advanced technology, they offered no control. But, at the time, this was a revolutionary start to the industry and an essential tool.

The 1970s proved an important decade for computers. Over those 10 years, Intel would release the first DRAM chip. IBM would invent floppy disks. Robert Metcalfe would introduce Ethernet. And Steve Jobs and Steve Wozniak would launch Apple. (To name a few advancements.)

Overall, computers were rapidly being found in the home and the workplace.

With this increase in demand, the semiconductor industry flourished. Particle counter and cleanroom users were putting new demands on manufacturers, which resulted in abounding innovation. Soon, other industries saw the advantages of particle counters and cleanrooms and began to introduce them.

Over the next three decades, particle counter manufacturers would introduce external communication interfaces, printing options, data logging, and other features we have come to be thankful for today.

Another addition to the industry in the 70s was the first introduction of the European Union (EU) Good Manufacturing Practice (GMP) for Medicinal Products for Human and Veterinary Use – Annex 1, commonly referred to as GMP Annex 1, in 1971. While the US and other parts of the world had recognized the danger of contamination in food and medications since the early 1900s, we know that GMP Annex 1 would go on to be a major factor in how cleanrooms are run throughout the world.

As a response to the increasing regulation and demand for semiconductors, the particle counter continued to flourish, grow, and innovate. During the 80s, white lights were replaced with cost-effective gas lasers. This improved the affordability of particle counters while shifting from light blocking to light scattering. Lasers allow for a more accurate reading.

In 1982, another revolution occurred: Lighthouse Worldwide Solutions was established and we launched our first software!

At this point, the particle counter industry was facing one serious hindrance: lack of consistency. You could buy two particle counters, put them in the same room, and get two completely different readings. This is because there was such a massive demand for particle counters that many organizations were essentially start ups scrambling to keep up with demand. There was a lack of universal standards, which left everyone reeling.

In 1997, JIS B 9921 was introduced to solve this problem. This is a Japanese standard for verification and calibration of particle counters. While not the most commonly referred to standard today, it does still stand, with the most recent revisions taking place in 2010.

Two years later, in 1999, ISO introduced ISO 14644, which is the standard for cleanrooms. While this document is broader than particle counters, it does pertain directly to them as it dictates cleanroom cleanliness and appropriate monitoring techniques. It is still one of the most pertinent standards we commonly refer to and develop technology around.

In 2003, Lighthouse changed the game when we introduced HH 3016 – the first particle counter with a touch screen. Touch screens are easily cleaned and sanitized: they limit particle traps, unlike buttons. Now, they are the standard.

Ten years after JIS B 9921 was introduced, ISO released their own calibration standards, ISO 21501. This remains the world standard for calibration today.

The 2000s would see another boom in computer technology, as well as the introduction and popularization of cell phones. As cell phones and computers shrunk, so did semiconductors. This drove further innovation for particle detection in particle counters. They needed to be able to sense smaller and smaller particles to protect the semiconductors.

We also saw the popularization of a variety of connectivity options in particle counters, going beyond ethernet.

In this decade, Lighthouse would release the ApexZ line, a portable particle counter designed to change the game. This particle counter took usability to the next level with industry standard setting battery life, recharge time, and ergonomics. It also brought self diagnostics to a new level with scary accuracy.

While we are still early in this decade, we are looking towards Pharma 4.0 and Industry 4.0: a future based on empowered employees, digitization, connectedness, and access to information. We’ve already seen massive shifts towards these principles in regulation updates such as the 2022 update to GMP Annex 1.

But if the last 40 years has taught us anything, it is that the future is yet to come.

Stay up to date with us in our Knowledge Center. Create your free account today.