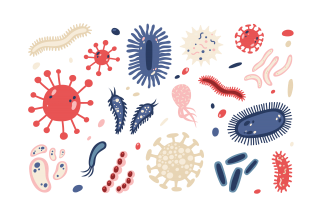 Does it matter what kind of particles exist in your cleanroom? Isn’t all contamination bad? On the surface, yes. You just need to know if your cleanroom is contaminated or not. Any contamination poses a risk to the contents of the cleanroom and, in some industries, a threat to the end-user or product.

But we need to go a layer deeper: what kind of contamination is present?

Not only will this determine the severity and type of threat to your cleanroom and product, but it will also help you to identify where it comes from. First things first, though, we need to discuss the aseptic environment and why we use the term.

What Is An Aseptic Environment?

Aseptic is defined as being “free from contamination caused by harmful bacteria, viruses, or other microorganisms.” In the medical field, we see aseptic fields quite often. This can be a surgical suite, tray, or on a patient’s body when an incision is about to occur.

In our industry, though, we see cleanrooms as an aseptic environment. Cleanrooms are carefully maintained and monitored to keep out contamination. They are also carefully calibrated to keep certain temperatures, air pressures, humidity, and more.

Aseptic environments serve an important purpose: keeping the space clean for whatever is being conducted in that room. Cleanrooms are used for research, manufacturing, and more in a number of industries. From pharmaceuticals to tech, cleanrooms are an important environment that protect the contents. When referring to it as an “aseptic environment,” we are usually referring to the medical or pharmaceutical industries.

In these industries, contamination does not only pose a threat to the product, but also to the end user. That is why it is so important to monitor the rooms. Not only are we monitoring for contamination, but also to prevent contaminants from growing.

Nonviable particles are non-living particulate matter. This includes dust, skin cells, clothing particles, pollen, and more. This type of contamination does not grow or spread; however, it still poses a serious threat to an aseptic environment.

Because the particle counter is measuring and quantifying the particles, not looking at their cellular makeup, it cannot tell the difference between a nonviable and viable particle. These two types of contamination are fundamentally different, so they need to be measured differently.

So how exactly are viable particles different from nonviable particles? Viable particles are live microorganisms. These can include yeast, bacteria, mold, fungi, and more. Not only are these contaminants dangerous to an aseptic environment because they are general contamination, but they have the potential to grow.

In 2018, we saw how impactful this could be. A NASA facility in Houston, Texas, became contaminated with a fungus. The culprit was an old air filter that had stopped working. The spores quickly grew and put years’ worth of expensive research at risk. Scientists were forced to reevaluate what they had been working on, and samples had to be disposed of.

While normal contamination would have been concerning, they now had to be concerned about growth and additional spores. Where had the contamination spread to? Which of their readings were genuine and which had been contaminated? How were they continuing to be contaminated?

Viable particles are more difficult to monitor than nonviable particles because you have to determine if they will grow. This can take extra time and effort. In addition to a particle counter, you will need to use an air sampler, like the ActiveCount100H, to get a full understanding of your aseptic environment contamination.

The air sampler passes the particle through or over a media that determines if there is growth. From there, you will be able to determine what kind of contamination you are dealing with.

Which Monitoring Is Right For Your Aseptic Environment?

When you are determining if nonviable or viable particle monitoring is right for you, you need to consider a few elements:

From there, you will be able to determine if you need to include viable particle counting into your cleanroom contamination control strategy.

What is the foundation of a cleanroom contamination control strategy? Your particle counter. We recommend using a particle counter that is backed by manufacturer support, sets industry standards, and leads innovation.

For air samplers, that’s the ActiveCount100H. This air sampler has a HEPA filtered exhaust and a d50 collection efficiency of 1 micron.

For air particle counters, the ApexZ50 sets industry standards. Not only is it the smallest and lightest on the market, but it also offers state-of-the-art integrations.

Do you want to see if either of these are the right fit for your aseptic environment? Schedule your hassle-free, no-obligation demonstration today.